One day, you wake up in an closed room. You don't remember anything, and worst of all: you discover you're a skeleton.

You have to escape from the room and figure out your meaning in life. Or death. Whatever.

This adventure is an entry to the Adventuron Halloween Jam and it was developed using Adventuron Classroom.

Special thanks to my family for support and rockersuke for testing and suggestions. Alkhemikal font by Font End Dev.

Great stuff! The logic of the game makes sense, which is crucial for knowing what to do, and let me think for myself once I understood the commands the game doesn't tell you are all nouns that also make sense (although alternatives such as GET to include "TAKE" would've been nice). It took me 5 minutes to figure out how to do something with the music box! - maybe put it also in the HELP command for inexperienced text adventurers?

It should also be noted I found music and sound options, but no audio played on Firefox version 72. I guess the game really didn't have them since it's a jam?

That aside, loved how the game felt to play. The font (I got here thanks to the author posting a link) gave a spooky, not scary vibe that complemented the modern, less serious tone; and the dithered pictures were absolutely stunning, although not 100% accurate to the game, such as the forest picture (while there's no "path", the sunlit background was dreamy to look at).

To summarize, I enjoyed this. Compared to a visual novel, I actually have to think to make a choice!

Thanks for the comments! And I'm glad you enjoyed the game.

Maybe it can be easier (using more synonyms and offering more help) but as you said it's a short (and rushed) game made for a jam. BTW, there's no audio in this game, the engine allows that but I decided to make a classic and soundless game.

Well done on the game. I wonder if you have a Twitter handle for when when I refer to the game on Twitter?

Some feedback on this page ....

I think you made a typo in your game tags., "aventuron".

You can also set a background image for the panel where you run the game by clicking EDIT THEME at the top of the page (see "Curse of Rabenstein for example of this).

Thanks, I fixed the typo. By the way, my twitter handle is @manuelsagra.

solved it! Had a good vibe!

I'm glad you liked it. Thanks for playing!

So after the first room I tried everything in the Main Hall (apparently that's where you unlock the next area) with the bell, the armour, the sword, the shield, can't do anything to the "wind", window, or wall. I have a feeling the bell does something, but after trying it with the dog there's nothing. I tried commands like "use" "move" "get" and "open" to no effect. Yeah, I'm stumped and starting to think there maybe a bug in this game preventing something from working, or there's something really hidden that I wouldn't find unless I do something random and illogical.

Ok, this is weird. I tried it the first, and many times after and nothing happened. Tried it just the next day and then it happened. Yeah, I'm suspecting something going on with the code or something.

Yes, there was a little bug in my code that was fixed. Sorry for that...

yea - I'm also stuck. has anyone finished it yet?

I thought it was really easy :-)

Examine everything, try to pick everything and new objects will appear and a new room will be unveiled.

Once you arrive st the graveyard only one object is needed to finish the game...

Did you get past the soil part that looks like something had recently been buried?

I didn't. have tried all the objects in the game afaics and no luck so far. also examined everything so far. I even pet the dog :)

In order to get the object buried in the soil you need a tool. That tool is stored somewhere near the hall...

I moved all the objects to the hall. if one needs to use the dog to dig then it doesn't seem to be possible to get it there. if we need a branch or something then nothing either. if the hall door needs to be unlocked then there's no object or object description that can help do that.

if you use a different browser can you finish the game as is? because I'm thinking we may have different versions and we're playing an old one.

You are absolutely right, there was a bug in the uploaded version that prevented the player from progressing in the hall. I've uploaded a fixed version and now, trying to pick a certain object opens the door.

Thank you for noticing and sorry for the bug!

Let me know if you can finish the game now.

This is really intriguing but MAN am I stuck. T_T

Once you know what to do, the game is really easy. Some tips:

Update: These tips helped a lot; just discovered an item I couldn't find before. :D

Have you unlocked the door in the hall? That's really important in order to advance...

There was a small bug in the previous version. You should unlock the door now when you try to pick certain object in the hall.

To make it clear the reason for the low inventory limit, you can customize the "cant carry any more items message) inside the theme / system_messages {} section: 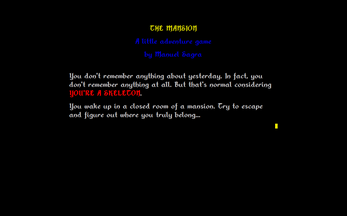 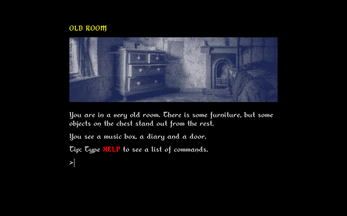 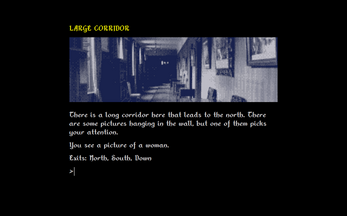