It all started as a joke. But as it usually happens in human history, everything went mad. A choice has to be made: only one combination of keys was the right one to play games. People who played with WASD, cursors and other marginal factions went down in history and now only eight people left in the two warring factions. It’s your choice: OPQA or QAOP?

You can play in a real Amstrad CPC machine or in an emulator such as Retro Virtual Machine.

Connect a tape player, insert the tape and rewind it. Execute |TAPE, and then type RUN” followed by ENTER (RETURN).

Connect a disk drive and insert the disk. Execute |DISK and then type RUN"opqa followed by ENTER (RETURN).

Insert the disk in the built-in drive and then type RUN”opqa followed by ENTER (RETURN).

Game mechanics are similar as the ones in other popular puzle games. The main objective is to form groups of pieces of the same colour -four at least- in order tosend “trash” to the other player, so their board is filled and so the rival is defeated. Pieces doesn’t have to be in line, they can be joined arbitrarily. It’s also important to know that when you make a combination of four or more pieces, every piece of trash around them also dissapears.

In order to send more trash to the rival, you have to make “combos”: making combinations one after another. You have to pay attention to the arrangement of the pieces so that when you eliminate a colour group you can make another combination after the pieces fall in place. Maybe it sounds a little tricky but you’ll get the hang of it in a few plays. But you should keep in mind that the more combos you make the faster the blocks will fall...

The special pieces (the purple ones with a golden circle in the center) are important too. When they fall in the board, they eliminate all the pieces of the same colour as the one below.

Finally, pay attention to the letters of the pieces. If your player is from Team OPQA and you form this combination of letters in a combo (either vertically or horizontally), you’ll be rewarded with 1000 extra points and you’ll send a doubleattack of trash to the rival. But forming QAOP with the pieces will reset your score back to zero and you’ll get a double attack from your opponent. Obviously, this happens the other way around for the characters of the QAOP team.

By default, all actions are mapped to the joysticks, but they can be reconfigured using the option Redefine Keys in the main menu.

Dedicated with love to Livi and my children Javi and Carol for enduring the hours that I dedicated to make this game. 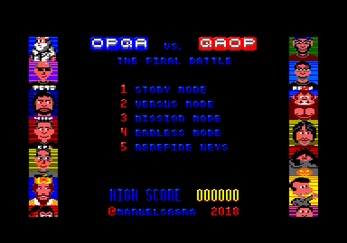 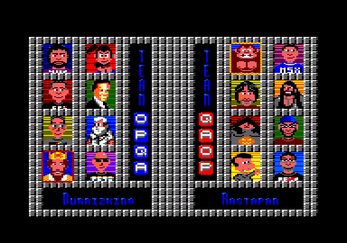 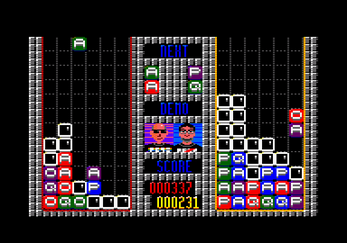 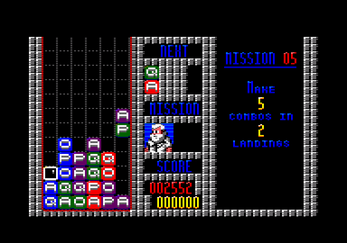